A good portion of my time during the winter months is spent re-stocking my stillwater fly boxes.  One question I get asked regularly is about tying realistic or imitative patterns versus suggestive or attractor style ones.  The amount of time required to tie a certain fly is often directly related to how realistic it will look.  I consider several factors when tying patterns for lake fishing.

The first thing to recognize is that trout and other fish living in lakes have a long time to inspect our fly patterns before deciding to eat or not eat.  In a stream or river environment food sources are passing by quickly and the fish have to make a split second decision to eat or pass on a potential meal.  Another important consideration is the speed at which aquatic insects and other invertebrates move through standing water.  The majority of stillwater trout food sources are slow swimmers or move in short bursts of speed.  Others such as chironomid pupae simply elevate or rise up vertically through the water.  Water clarity also plays a factor in how visible food sources and imitations of them are seen at depth by the fish. 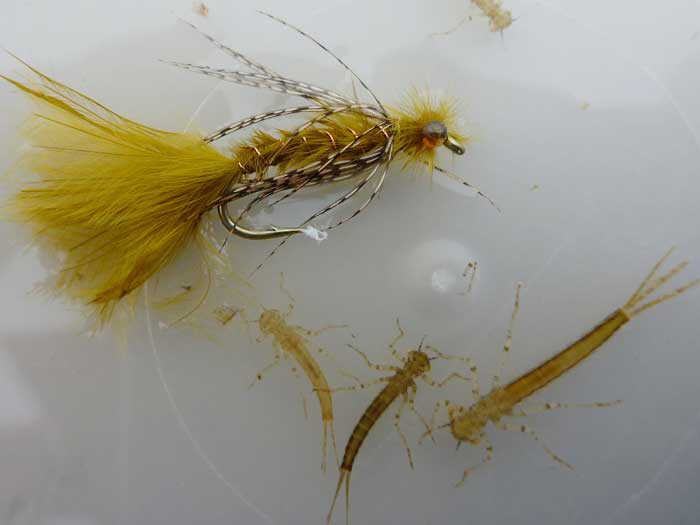 The intensity and duration of specific insect emergences will also have an impact on fly pattern selection.  For instance, at the start of the first mayfly emergences of the season, we can often do quite well on suggestive nymphal patterns such as a Hares Ear nymph or even a small halfback.  However, as the intensity of the hatch builds the trout will get more and more selective on what patterns they will eat.  Realistic imitations of the nymph become essential to continue to fool these now very picky eaters.  This scenario can also be applied to damselfly, dragonfly and caddisfly emergences.  Suggestive patterns will catch fish early on but more imitative flies will catch us more fish in the end. 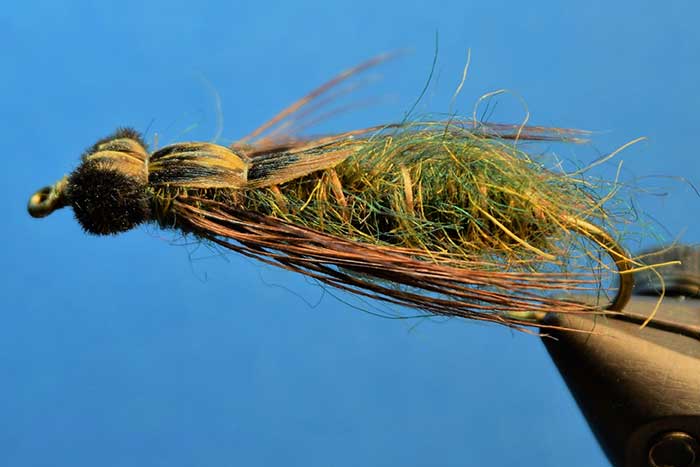 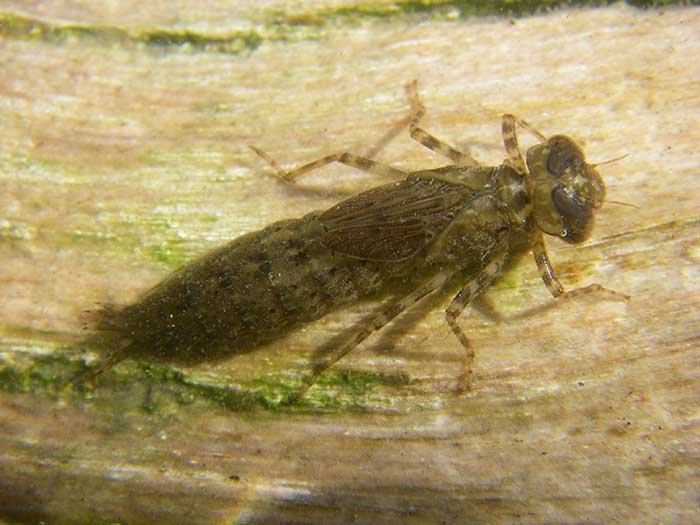 Leeches are another staple, year-round trout food. Some days an attractor style pattern such as a woolly bugger will be all that is needed but more often than not we need to use  patterns that are a little closer to the actual color and size of the real leeches in that particular waterbody.  Remember water clarity, water temperature and time of year all have a bearing on overall leech activity levels and related interest in them by the fish. 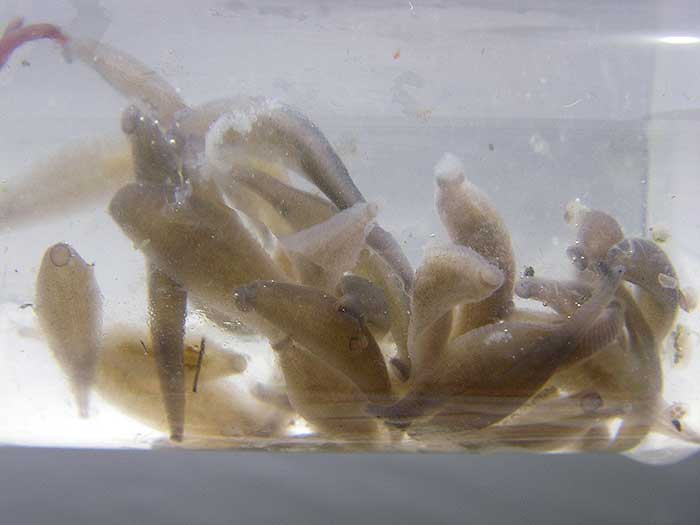 Baby leeches in a vial 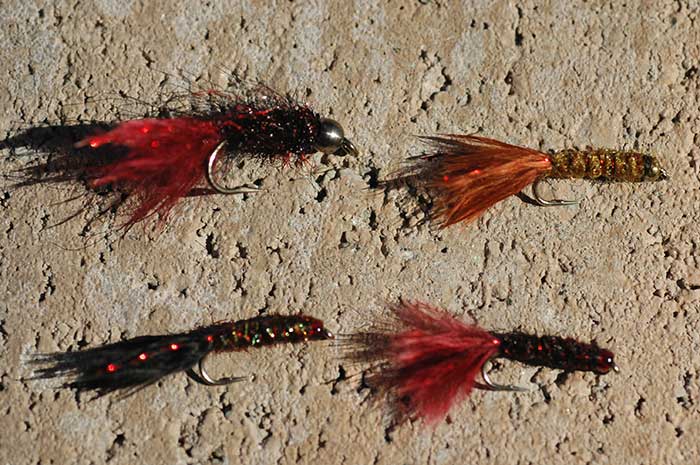 The one insect emergence that does require more realistic patterns from the get-go are chironomids or midge pupae.  The sheer number of real pupa suspended or moving up through the water column give the trout plenty of time to inspect, refuse or inhale our imitations.  A throat pump is an essential tool to use during this specific insect hatch.  We want to match size and color as closely as possible to the real bugs.  Of course, there are days when pupal patterns of totally different colors will work better than the almost real looking ones we have been fishing for the past two hours. A good example of this are pupal patterns tied with blue bodies.  Why this color can at times be so effective when there are, to my knowledge, no blue chironomid pupa is a mystery to me but that is just another fun part of fly fishing that keeps us coming back for more. 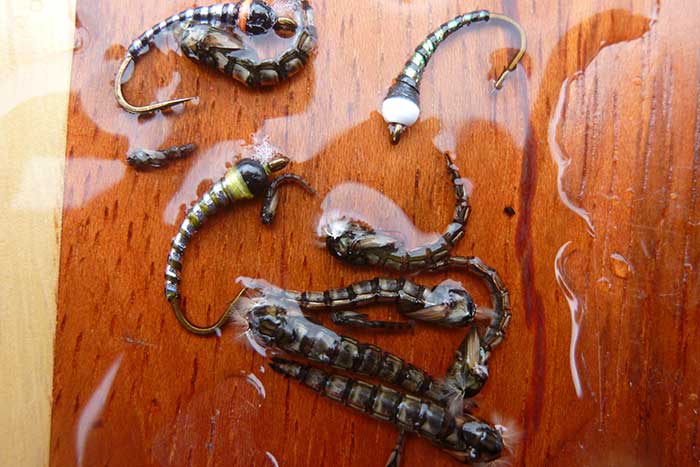 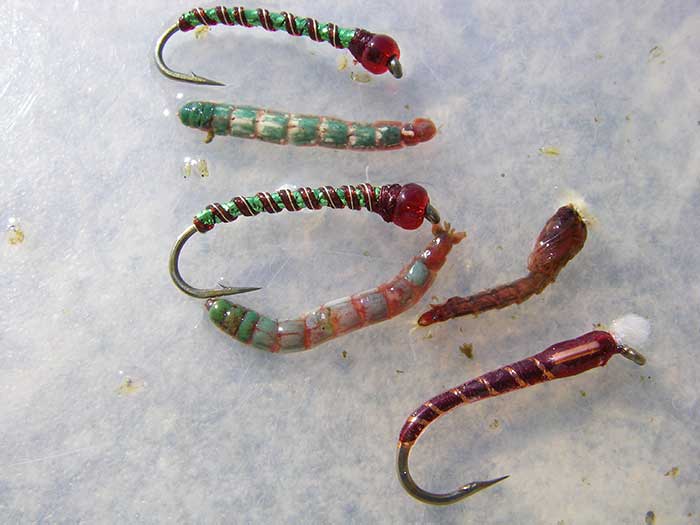 The bottom line is fly fishers need to have a mix of suggestive and imitative patterns for the major food sources of trout in stillwaters.  Taking into consideration whether you are fishing early in a particular insect emergence or towards the tail end of the hatch will help in selecting the right fly pattern.