Some People Learn To Cook, Others Just Eat Oreos & Learn To Tie Flies

Some People Learn To Cook, Others Just Eat Oreos & Learn To Tie Flies – By Jesse Paulsen

I often get a lot of questions on fly tying. Most of the questions stem around how I got into it and what some of my recommendations would be. So, I thought I would get right to the point in this blog post. Let’s answer some of these questions for those of you looking to get behind the vise!

How did I first get into fly tying?

I tied my very first fly EVER about 2 1/2 years ago. (So really, I am a complete newbie to fly tying!) I was curious about tying because one of my close fishing buddies had tied almost all of his flies on his own. He had a tying bench setup in his living room with all of his materials out. One day, I just simply asked him to show me how to tie a fly. He walked me through a Squamish poacher, step-by-step. Now, for those of you who know what a Squamish poacher is — it’s definitely not the easiest of flies to tie, especially for your first. He tied one beside me as I followed his steps. He then walked away from the table and told me to tie a second one by myself from memory of what we just did. 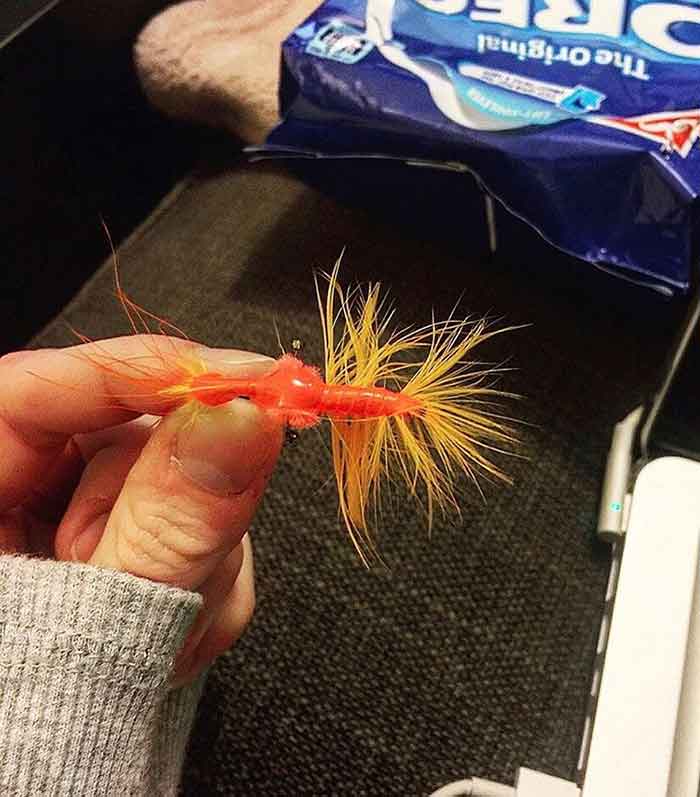 Low and behold — I nailed it, and I was pretty proud of myself. Ever since that first Squamish poacher, I knew fly tying was something I could excel at. That being said — I didn’t just go out and buy a whole bunch of fly tying stuff the next day and start tying every single night right off the bat. For the first year or so, I could fit most of my fly tying material in 2 large Ziplock freezer bags. Then, I really only tied once a month. I was lucky enough to have been given a used vise from one of the employees at Michael and Young. After that, I went out and bought a couple colors of marabou, tinsel and crazy legs. I really had the bare minimum in fly tying materials and tools. This was how I first started out. So no, I really wasn’t all that into it until about a year later.

How did I REALLY get into fly tying?

A little over a year later, I found myself much more into it, especially after I received my very first spey rod. Spey flies intrigued me and I found myself spending hours and hours looking at different photos of them online. I don’t know why, but I thought intruders were so beautiful, and I wanted to learn to tie them. At this point I didn’t really have anyone to teach me much. So, I had to find ways to teach myself. I highly recommend taking classes if you can, but I didn’t have that luxury at the time due to other expenses — so I found ways around that. Books, Youtube videos, and A LOT of time spent playing with different materials and seeing how tying them on different ways looked different in the water. 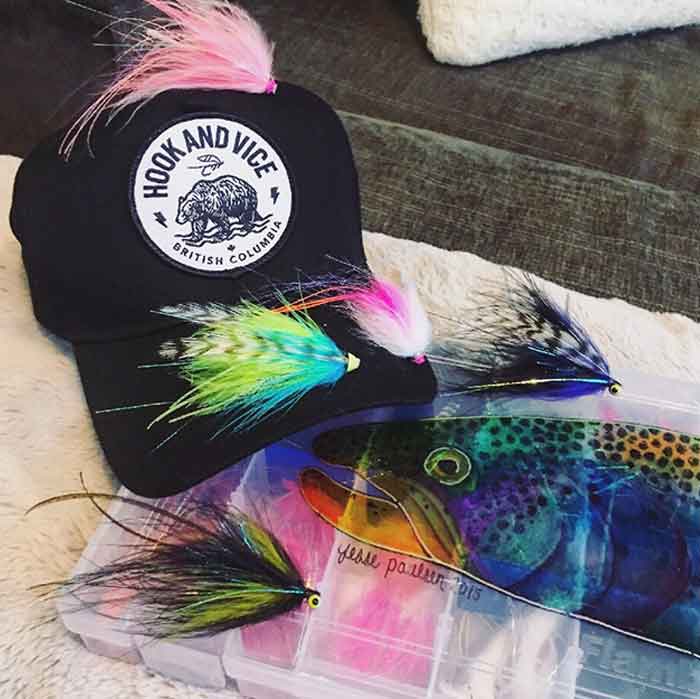 I started to spend at least 2-3 nights a week tying after work, and playing with them in the bathroom sink. A large amount of time was invested into tying every single week, even still. I knew that if I was going to get into this — I wanted to be respected for learning a lot about it, and that my flies would be epic. I found that once you really know and understand the basics and how different materials are used, work and flow in the water — you can be more creative & design your own flies quite easily. Also, I highly recommend to take the time to learn the basic concepts of fly tying, rather than just learning how to tie specific, individual flies. Someone else gave me the advice and I am thankful for that everyday, because I am a much better fly tier for it. 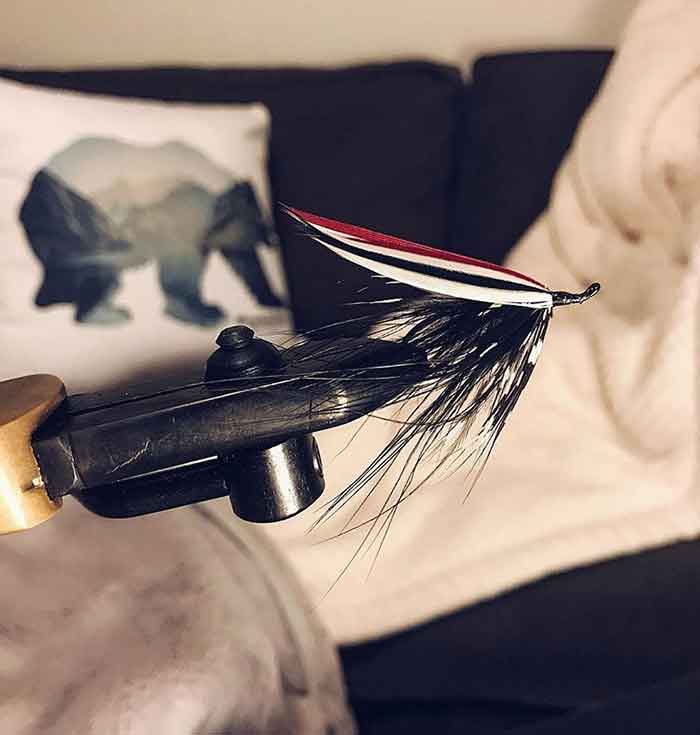 What tools do I use?

At this point, my tools and vise are nothing fancy. I simply don’t have the means to spend that much money on a high end and expensive vise. So if you are like me — you really can make the most of a cheaper vise and tools. The one I am using most often now is a knock-off vise of a popular brand. It was under $40 but I received it as a gift. All of my tying tools are fairly low-end. They aren’t expensive, but they get the job done. The key thing is that your vise holds your hook firmly in place. If you can afford a more expensive vise, that is great too! I am all for it, as I know I’d love to have something nicer, but it’s not going to necessarily make or break you.

Where do I get all my ideas from?

Like many others, we all had to start somewhere. Most of my ideas come from great fly tiers who post their flies on social media. I follow a lot of really great accounts on Instagram! That being said, I refuse to copy flies of others. They have all worked hard at developing their own style and patterns, and I respect that. I usually take bits and pieces from a few different flies and try to always combine it into something of my own. 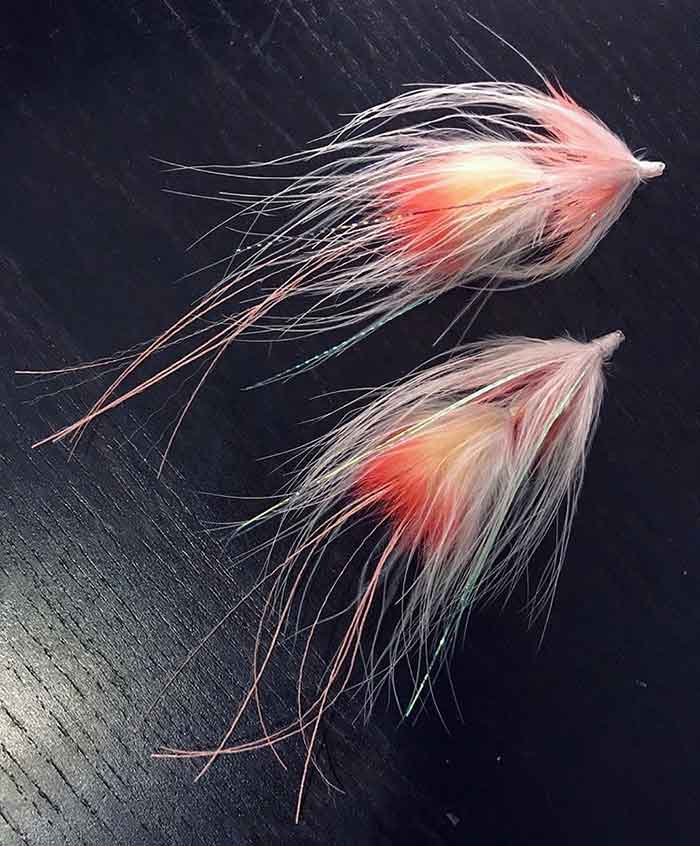 One thing that is different about me is that I tie a variety of types of flies. Whereas, I notice many fly tiers tend to stick to flies for one type of fishing or a specific group of flies. I want to be a well-rounded tier, so I tie a lot of different flies and patterns. If I see a cool fly online no matter what type of fly it is, I am usually trying to attempt tying something similar that night. I do recommend being apart of your local fly fishing groups on social media. You will find many tiers will post their latest creations on those groups, and are usually more than willing to give you tips and ideas!

What do you find the most challenging about learning to tie?

I have always felt the most challenging part for me is accepting that not every single fly is going to be great. It is a lot of trial and error. Some flies look amazing on the vise, but as soon as they hit the water they are too heavy or just look flat. You have to spend a lot of time learning things for yourself. Also, not being hard on yourself if you don’t get it right the first time. It’s a matter of just taking it back to the vise and figuring out where you went wrong, and fixing it.

I wish you the best of luck on your adventures behind the vise! 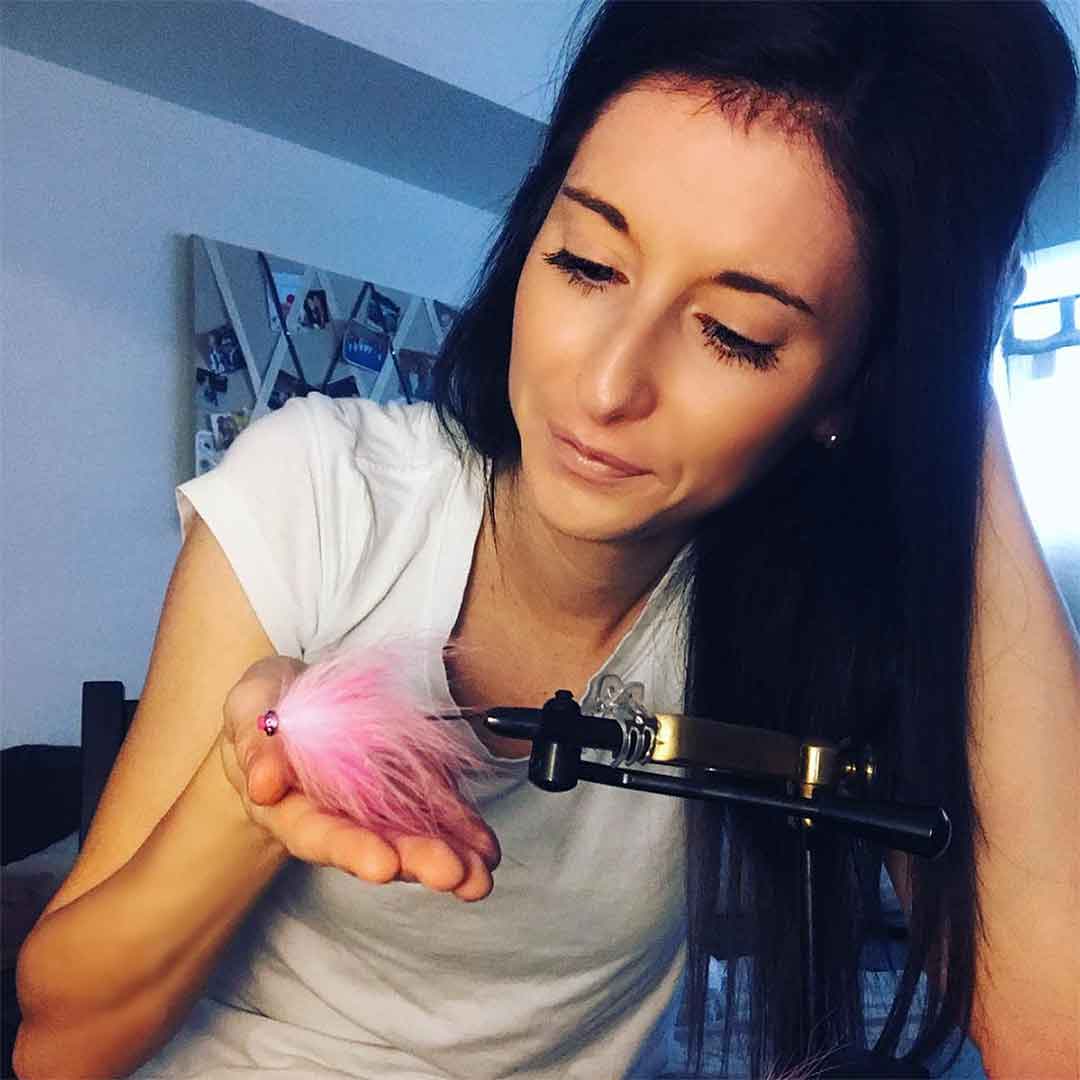 Born & raised in a very, very small town in Northern Ontario and moved to BC in 2011. She has been living her wildest dreams ever since. Role model to all the girls who aren’t afraid to run with the boys. Avid fly fisherman and fly tier, Jesse is an all around rad chick. Her favourite Hook And Vice cap is the Traditional Camo Trucker – Bear.